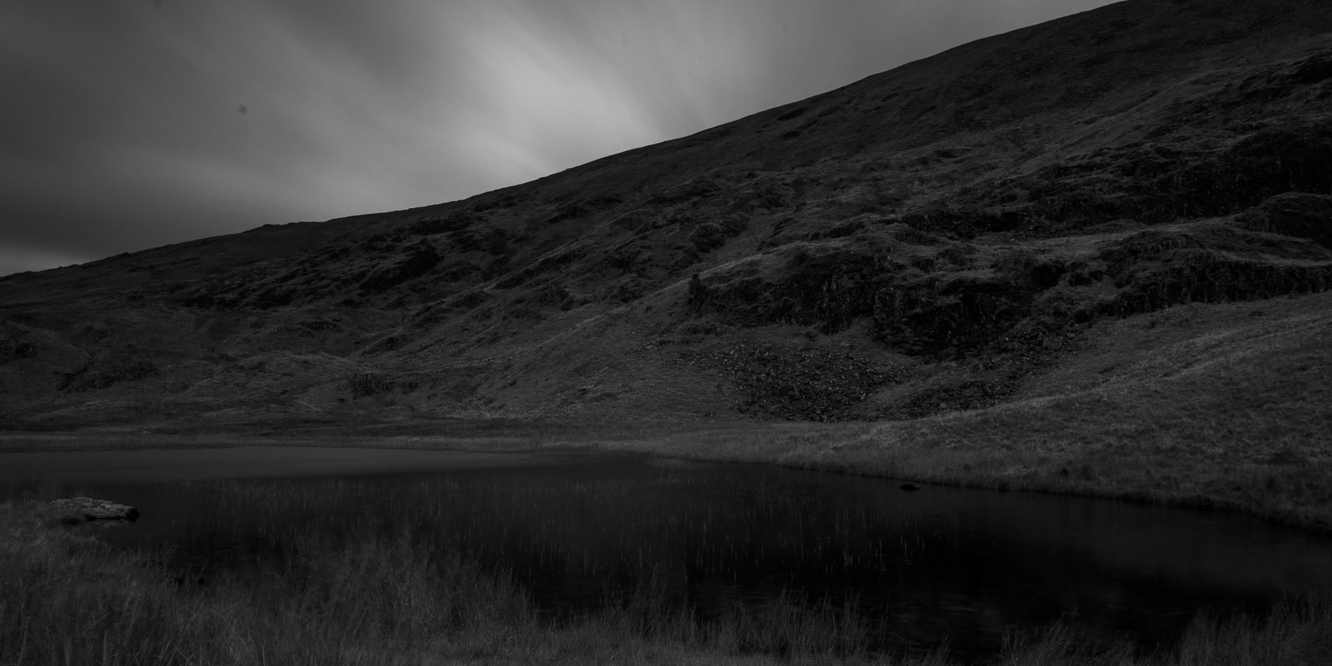 The past few years years has seen less frequent wild camps than a decade ago. Recently, I’ve only managed yearly wild camps with Jason, generally in the snow. The main reason has been my renewed enjoyment of mountain biking. However, this increased cycling has aggravated my back pain. In most pursuits I’m in a hinged position, either driving, sitting at a computer, or cycling. Recently, my physio recommended trying to do more exercise in a non hinged position, and advised running and walking. I have been running recently to compliment my gym training, but I have also stepped up my walking too.

Cheryl and I hill walk regularly, but in a determined effort to strengthen my back, I’ve decided to do combine longer walks with carrying more weight, all whilst ensuring good posture. This naturally evolved to a desire for a wild camp.

As typical when planning wild camps, I trawled my memories recalling camping spots offering convenience, shelter from the elements, and beauty. For this one, my mind went straight back to some old sheep pens next to Dale Head Tarn near Honister Pass.

A decision on the camping spot offered an obvious backpacking route. I would start midday Friday, walking from Keswick over Catbells, Maiden Moor, and High Spy, where I should reach Dale Head Tarn around sunset. A full day Saturday would afford me the time to descend to Honister to load up on bacon and use the facilities, I’m far too urbanised to wild toilet these days. Then I’d climb Grey Knotts, Brandreth, and Green Gable, with a possible stretch to Great Gable. Finally, I’d either camp up high, to descend Sunday, or make an early descent during the afternoon to catch to bus back to Keswick.

The walk to camp

On Friday morning, I jumped in the car fairly early, and drove up the M6 towards Cumbria. The weather forecast suggested it would be dry up north, but I just couldn’t trust it as I drove through torrential rain past Liverpool. It was still raining as I reached junction 36, and I’d already started to consider alternative accommodation, but as I started to climb towards Shap summit on the motorway, the rain disappeared, replaced with blue skies. The camp was back on…

I’d given little thought about where to park in Keswick during the two day walk, so as I approached Keswick, I decided to try Castlerigg Hall Campsite. They were more than happy hosting the car for the evening on the condition that I’d camp the next night, so I parked up, packed my rucksack, and started the walk to Keswick.

I’d initially planned to grab lunch in Keswick, but it was busy and I didn’t want to spend lots of time in the town. I thus continued on towards Catbells. It’s a walk I know well, Cheryl and I did this walk in reverse only a few weeks ago. As I approached Catbells, my stomach started rumbling, and I knew the pasta pot I was carrying would be insufficient to get me to Dale Head Tarn. Reaching Lingholm, I decided to pay it’s cafe a visit. It’s a lovely place, beautiful grounds, and lots of appetising food on offer. I plumped for a large piece carrot cake.

Once refuelled, I started to climb Catbells. It’s a lovely little fell. The easy scrambling adds a little fun, and I was soon on the final approach to it’s summit. And then the heavens opened, first with rain, and then horizontal hail that really bit, even through waterproofs. The shower was short lived though, and by the time I’d crested the summit, blue skies returned.

I made fair progress up and over Maiden Moor and High Spy, until I started to tire as I approached Dale Head Tarn. I’d originally considered climbing to Dale Head before returning back to camp, but on seeing the 250 metres or so of ascent, I thought better of it. Instead, I made a beeline to the sheep pen that I’d planned to camp in. I was gutted when I rounded the corner to see a few tents already pitched on my spot. I walked past the group and found a alternative area behind a dry stone wall and pitched my trusty Laser Competition.

With only perhaps 45 minutes of daylight left, I quickly ate my pasta, took a few photographs of the tarn, and retired to my sleeping bag. It was a windy night as forecast. That dry stone wall gave little shelter from the wind, and I struggled to sleep. In the end, it was nearly midnight when I finally fell of, and I awoke around 5am. Would sunrise provide better light than the previous evening?

I peeked out of the tent just before sunrise and was disappointed by cloud cover. There was little little chance of a photogenic sunrise, or even a golden hour. However it was dry and I had breakfast to eat, but before that I’d have to descend to Honister.

The tent was soaked externally, but dry inside so it stowed fine. I left camp around 7am, and headed to Launchy Tarn. On arrival, I turned right and headed towards Honister Pass. The descent was easy due to my fresh legs, and the thought of sausage sandwiches.

I arrived at Honister Slate Mine before it officially opened, and the sausages had only just started cooking and thus I had to make do with a bacon roll. Oh well… Anyhow, it fuelled my ascent up Grey Knotts. It’s a pretty steep climb with nice sections of easy scrambling. Starting high also meant it was a short climb, perhaps taking an hour.

On top, I was greeted to mist, and stronger winds. I put on my gloves and hat, although managed to avoid waterproof trousers. The walk between Grey Knotts and Green Gable, over Brandreth was amazing. The views to the left down Borrowdale were clear and pretty, but the drama was to the right. Buttermere, Crummock Water, Ennerdale, the nuclear power station. All laid out in a wide vista, periodically but temporarily erased by fast moving cloud cover. As I finally started to climb Green Gable, the clouds lifted and I got a great view of Great Gable. Such a huge lump of rock.

Whilst climbing Green Gable, I contemplated whether I had the legs for the scrambling and extra 500 metres of ascent out and back. However sense prevailed, and I chickened out. Instead, on summiting Green Gable, I finished that damn pasta, and descended to Base Brown. It’s a nice, if slightly dull peak, but the weather was improving, and I’d had a bit of fun grough hopping en route.

It was a quick out and back, quickly turning at the summit to start descending into Gillercomb. It’s an epic hanging valley, with great views and a classic glacial u shape. The path down through Gillercomb is particularly tiring. I understand why Fix the Fells construct footpaths the way they do, but I do find the relentless steps tough going. Just as I arrived at the end of the valley, I hoped for a little bit of respite, but instead was offered some of the hardest descending I’ve done in a long time, not eased with tired legs, and a heavy backpack.

The scramble down the waterfall is tricky, scary, and fun, in equal measure. I was delighted to finally reach the valley floor with both knees intact, a feat unimaginable a few years ago. I attribute this to the core workouts I’ve been doing recently, and the resultant improvement in my posture reducing stress on my legs.

All that remained was a quick bus ride back to Keswick, a burger and cider at The Bank Tavern, and a walk back up to Castlerigg for a luxury campsite camp. I slept well, especially with a calm evening.

On Sunday morning, I awoke around 7:30, quickly struck camp, and made a beeline for home via Tebay services for a cheeky breakfast.

Software developer living in the Midlands, mainly interested in mountains and the walking, biking down and photographing thereof View all posts by Paul Williams